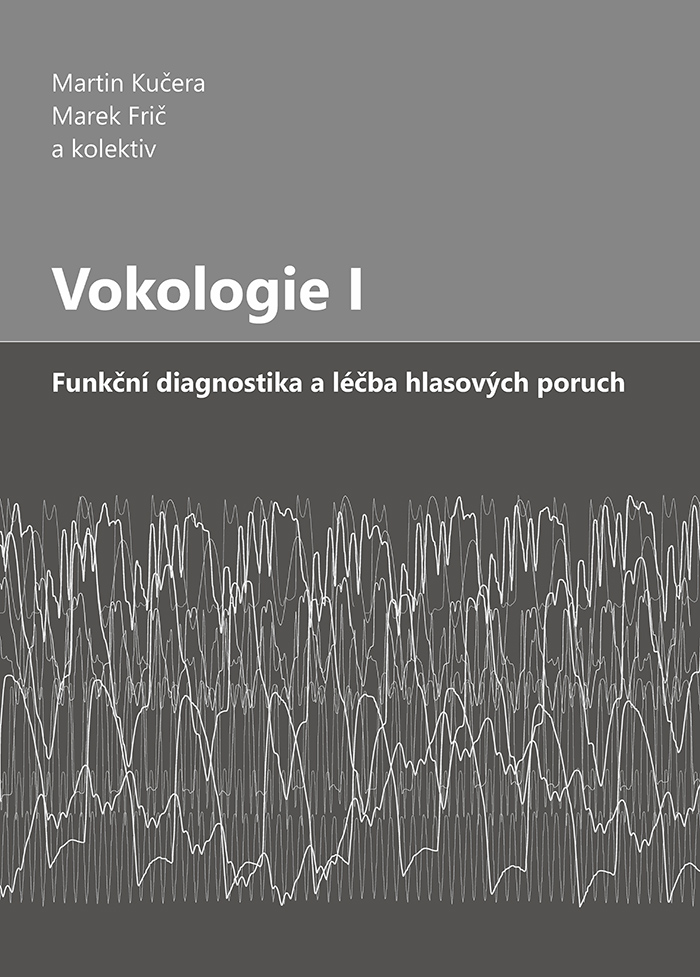 The book Vokology I – functional diagnosis and treatment of voice disorders is intended for professionals who deal with the voice in its norm and pathology. The text is a result of long-term cooperation of several professionals working with communication disorders in both clinical practice and research in the field of psychoacoustics. (Martin Kučera, M.D. – ENT physician, phoniatrician, RNDr. Marek Frič, PhD. – biophysicist, specialist in psychoacoustics, Mgr. Kateřina Fritzlová – clinical speech therapist, Mgr. Martin Halíř – clinical psychologist, advisor to the Ministry of Health for the implementation of multidisciplinary teams). One field of this cooperation and the content of the monograph is the application of research results into routine clinical practice. The other, no less significant is a multidisciplinary field. Each of the authors deals with the voice in their profession and the interdisciplinary cooperation and the search for common views within the voice issue is the essence of this cooperation. At the same time, all authors work as lecturers of the Practical Course of Voice Rehabilitation and Reeducation and they created the so-called “Opočno concept” of diagnostics and conservative treatment of voice disorders.  The book provides a comprehensive insight into the issues of diagnostics and conservative treatment of voice disorders with a focus on voice reeducation/rehabilitation. The text is divided into ten chapters in which the voice in its norm and pathology is defined in terms of functional anatomy, physiology, psychoacoustics and vibroacoustics.  Special attention is paid to the differential diagnosis of functional voice disorders: the methodology of evaluation of laryngoscopic and stroboscopic findings, perceptual evaluation of voice including GRBAS scale and examination of the voice range profile (VRP). The case studies show basic therapeutic approaches which were chosen mainly on the basis of examination of the voice range profile. Multimedia attachement forms an integral part of the monograph.

Chap. 1 Clinical examination of voice and vocal apparatus; the chapter shows the fundamentals of functional anatomy of the larynx and puts them into context with the physiology of voice production with respect to the formation of basic vocal modalities (intensity of sound, pitch). Essential for understanding voice production is a need for recognition of three basic functional modalities: vocal fold movement, coordination of vocal fold movement and changes in volume/elasticity of vocal folds which ultimately determinate the quality of a glottal closure and the ability of vocal fold vibration. The described mechanisms of voice production are also related to the acoustic manifestations which we perceive in the perceptual evaluation of voice.

Chap. 3 Fundamentals of vibroacoustics; the chapter summarizes the basic knowledge about the acoustic properties of the voice which are put into context with the vibrational properties of the vocal folds. How the voice is produced from the point of view of vibroacoustics (exciter-oscillator-modulation) and definition of terms: loudness, pitch, timbre, time envelope and signal waveform, formant, breathiness, roughness, voice registers, etc. Demonstrations of basic sounds described in this chapter are also available on the multimedia attachement.

Chap. 4 Resonance and resonant voice; in the separate chapter is described in detail the phenomenon of resonance from three basic viewpoints – from the perspective of a voice teacher/therapist  and from the point of view of acoustics and vocology.

Chap. 6 Perceptual evaluation of voice; evaluation of voice solely by listening is shown as a complex perceptual process that describes both subject’s ability to work with the voice and the subject as a whole. The chapter introduces significant methodologies of voice evaluation, 7-stage UEP methodology, GRBAS (Hirano), RBH, CAPE-V (ASHA), Protocol the Bufalo III Voice Profile, Vocal Profile Analysis Scheme (VPAS), Voice skills perceptual profile (VSPP) etc. The principles of acoustic phenomena observed in voice pathologies are described in electroglottographic records, video- kymograms and spectral analysis of voice. E.g.: types of roughness, breathiness, asthenicity, strain, instability.  The next part of the chapter is devoted to voice onset, register transitions, evaluation of speech in the context of examination of voice, evaluation of respiratory function, respirophonatory and respirophonoarticulatory coordination in the context of perception of muscle and mental tension of an individual. To this chapter are available two multimedia attachements. In the first multimedia attachement are found laryngostroboscopic, videokymographic and sound samples described phenomena of various voice characteristics. The second multimedia attachement contains audio samples of standardized examples of different degrees of voice disorder in the context of fundamental pathological voice characteristics.

Chap. 9 Case reports, analysis of the effectiveness of therapy and demonstrations of clinical examination before and after treatment; the authors of this chapter described three basic pathological findings made during the examination of the voice range profile, which are most frequently encountered in voice disorders. These are: pathological position of conversational speech in relation to dynamic and frequency range of the singing voice, dissociation of some voice modality from the voice range profile area of the other modalities, reduction of all voice modalities. Nine case reports describe the search for a therapeutic plan in which examination of the VRP played a key role.  Each case report contains a description of the voice range profile (incl. distribution charts of singing power ratio and Shimmer parameters in singing voice range profile), GRBAS, videolaryngoscopy and stroboscopy before and after treatment. Individual cases are documented in the multimedia attachment including stroboscopic records and sound samples (habitual reading, medium and maximum amplified calls). Each case report briefly describes the therapeutic procedure and summarizes the effect of the treatment.

Chap. 10 Illness and health, multidisciplinary field, dialogues of networks; the authors describe some basic models focused on health and the emergence of disease, such as The Bio-Psycho-Social Model by George Engel, or Model of Circular Causality. They are put in contrary with causal and linear models. The chapter reveals the roots of some common and misleading terms, such as the Marxist teachings of the notion of “psychogenic superstructure”, etc. The following terms are defined that are important to perceive when setting therapeutic goals and course of treatment itself: restoration, spontaneous remission, regeneration, recuperation in concept of “Recovery”, adaptation, habituation, rehabilitation. At the end of the chapter are discussed different models of team cooperation across disciplines and professionals involved in the therapeutic process. These involve parallel treatment by different specialist without sharing the information, medical consultation, case management and multidisciplinary team, “open dialog” approach.